Flower boy is a complete rap album from someone who has no need to impress any one but himself. Tyler the creator has done what most rappers can’t. Mature.

This album shows that Tyler the Creator is a million miles away from where he began. Flower boy is musically enhanced in every sense of the word. It’s actually incredible to witness an artist progress like this. Behind all this change Tyler is still presenting the same message. Be you. 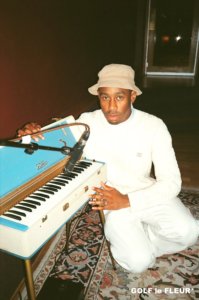 We can remember when we first heard Yonkers. Not only was it the first real music video carried by social media, every millennial shared it on the new frontier that is Facebook. But it was the first song I had heard that made me think, “Shit son this actually offends everyone”. And unlike most music that offends. People had a genuine reason to be pissed off with this. It was offensive as hell! But real! You couldn’t argue with it. You respected it so much.

Tyler the creator’s Flower Boy is no different. Here we have a matured Tyler but the lines are still Incredible. The album presents a nice balance between the underground Tyler we all love and know. With a blatant mellow influence acquired from his time working with Pharrell and Frank ocean. This contrast Is mirrored in the lyrics. The mellow tracks are more of a personal contribution, Tyler describes his personal battle. The Grimier tracks are just as real but more a commentary on everyone else.

it’s impossible with this album. No joke, It’s all so well written. In our humble opinion the track that stands out the most is November, As a commentary it delves into everyones greatest day. Tyler explains that he longs for November and now compares his worst scenarios to that day in November..

“What if my accountant ain’t payin’ my taxes?
Fillin’ his pockets and IRS show up asking me questions
I couldn’t answer ’cause I was too busy tryna make classics”

This track is a complete commentary on how the industry works and Tyler is not naïve to it.
That’s what we loved about him. Rappers come and go, most claim to be real, a handful are. Tyler was and still is what rap needs.