In the Spotlight: Tishk Barzanji 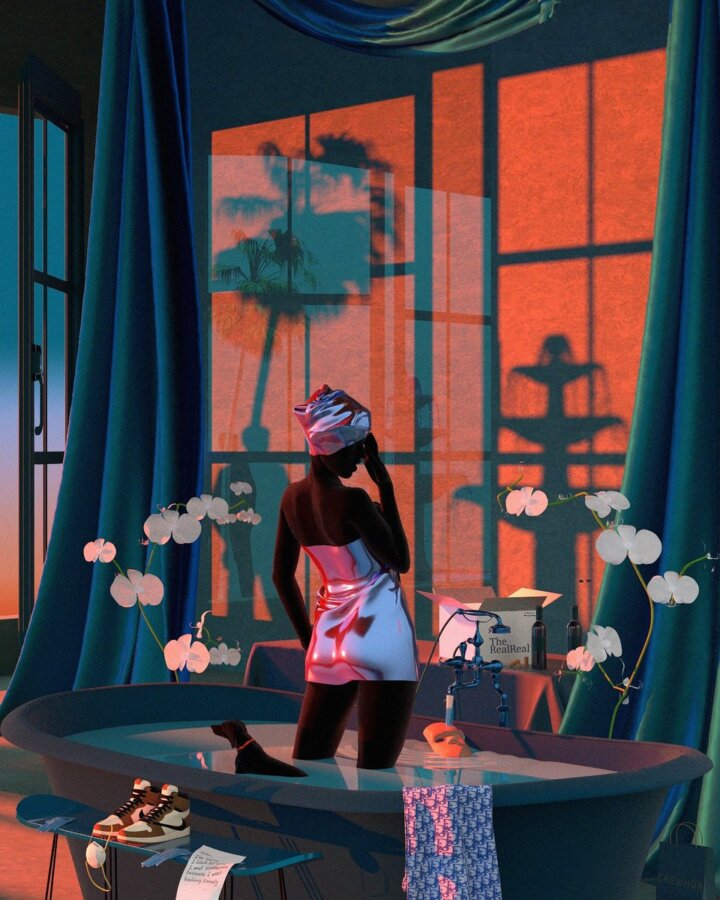 ‘I’m sorry. I lied to you. I met someone because I was feeling lonely.’ So reads the crumpled note that lies half-on the side table in the foreground of Tishk Barzanji’s Misguided. It appears as a confession of infidelity, a momentary lapse of loyalty. The note is one of betrayal, that much is clear, but it takes on new depth when put into the context of the times we’re living through. Barzanji created the piece in the height of the first lockdown during a time when infidelity could be just as harmful to your health as it is to your heart. There’s hints of the pandemic dotted carefully throughout. A face mask dangled off the toe of a pair of Nikes, two disposable gloves strewn on either side.

Quarantine was a strange time, it led to desperation, dishonesty but also love and joy. Her mask falls off. She washes it for 20 seconds each night.
“Did you meet someone else my love?” No answer.
Silence bounced, fell off her tongue
And sat between us
And clogged my throat.
It slaughtered my trust.

In the centre of the piece, we see the back of a woman as she turns away, her hand to her face. On the wall, the shadow of a man watching her from out of shot. While he’s not explicitly seen, his presence is clearly felt. Like a lot of Barzanji’s work, Misguided explores human tragedy in an abstract world of bold colour choices and sweeping architecture. It’s cinematic and surreal, depicting a dark domestic scene against a bright colour palette. The silhouetted characters are characteristic of his work, expressionless but never without emotion. Instead of their faces, it’s their body language that communicates their feelings – their posture and  mannerisms and the subtleties of how they interact with each other and the space around them. His characters exist in these expansive, almost fantastical, interiors. Visually, there’s this sense that these are small people in big spaces but metaphysically, the story is very different. They’re the crux of every piece.

It tore memories out of my mouth.
We exchanged blind words,
And I did not cry,
But blackness filled my ears,
Blackness lunged in my heart,
And oxygen turned into suffocating my lungs.
Such silence has an actual sound,
The sound of disappearance.

Like a lot of Barzanji’s work, there’s a loneliness that permeates through Misguided. His characters are anonymous and often pictured alone. When company is present, it somehow feels more alienating than it does comforting. In A Song for You, we see a naked woman, crouched despondently at the end of a bed while life goes on in the shadows behind her. In Ignis Fatuus, despite there being three characters  present, they feel distant from one another, all seemingly lost in their own little worlds. This sense of isolation perhaps rings true now more than ever. For Barzanji, we might trace it back to his own biography. Born in Kurdistan, a region that denied the ethnic group statehood, he migrated to England in 1997 and grew up in a Dalston estate amongst the brutalist architecture of London. When a case of migraine vertigo left him bed-ridden for eight months, a period of introspection found Barzanji returning to the escapism of art, using it as an outlet to escape into his mind. It was therapy in a sense – a way to travels inwards, when travelling outwards wasn’t an option.

What a life to live?
You ditched something good for the unknown.
She tends, the dog in his apartment,
He visits in the evening.
We know where you met
That building where we laid our last kiss
We know you’re looking for comfort, this isn’t it.
I’m not upset that you lied to me, I’m upset that from now on I can’t believe you.

There’s something deeply captivating about the way Barzanji constructs each scene. He pairs each piece with captions that are somewhere in the murky waters between poetry and prose. They contextualise, adding depth and meaning in a way we don’t often get with art. We’re normally left to fill in the gaps for ourselves, guess the thought process behind the colours and strokes for ourselves and find our own meaning. But with Barzanji’s accompanying words, we’re granted a glimpse into his brain, allowing us to view each piece just as it was intended by the artist. It’s a transformational approach to art, with all the satisfaction of individual interpretation as well as a deeper understanding that connects us to the man behind the art. It’s pure poetry and art, demonstrating Barzanji’s talent as not just a visual artist, but an incredibly nuanced storyteller too.

Her Life became a bet
Throw the dice, see where it set
I wish you the best.

Tishk’s works are available to buy as prints over at tishkbarzanji.co.uk. I’d highly recommend following his Instagram too – it is gorgeous.